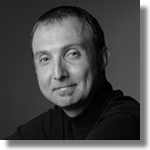 The following article was written by Jay Beech as a commentary on his hymn,
All Is Ready Now, and appears here by permission from Cross Accent -
The Journal of The Association of Lutheran Church Musicians - 2008, Vol.16, No.2

When you get right down to it, I have much in common with The Grinch. The closer we get to Christmas, the grumpier I become. In my case, it is probably due, at least in part, not to tight shoes but to my mild case of Seasonal Affect Disorder brought on by one ever-shortening gray November day after another. So, as the “holiday” sale circulars begin to arrive early in October, I find myself muttering snidely to my dog, (Steve, not Max): “I'm sure these were printed on paper made from recycling last year's Christmas trees.” Reading that the seniors group from our congregation is planning to take a tour of local lighting displays, I say to my wife sarcastically, “That should be almost as beautiful as Las Vegas.”

One of the things that really bugged The Grinch was the singing. You church musicians have GOT to be able to relate this one! Unless you remain in your cave, you absolutely cannot escape the singing of Christmas carols all through Advent and even earlier. These people cannot be reasoned with. Even in your congregation, the tall and the small, hand in hand, will stand in solidarity against you — resolute in their opposition to the proper observation of the Church Year — ready to sing “Hark! The Herald Angels Sing” on the First Sunday in Advent. That is something I like least of all.

It seems to me that, to a large extent, The Grinch has simply been misunderstood. I mean, what was he trying to prevent? The commercialization of Christmas, of course! Remember his great Epiphany? “Maybe Christmas, he thought, doesn't come from a store. Maybe Christmas… perhaps… means a little bit more!” Sure, you can argue with his methods, but I think his insight is spot on. MANY are the times when, having overloaded our sleigh/van with gifts in our parents' driveways, I've wished we could drive to the top of Mt. Crumpet on our way home and dump the whole works. Unfortunately, I live in Moorhead, MN on the bottom of a dried glacial lakebed, so I am not able to look down with righteous indignation on those Whos living below. Believe me, I would if I could.

In all seriousness, this feeling of cultural alienation and the accompanying resentment regarding the misunderstanding and excesses of gift giving have probably influenced everything I've ever written for the Christmas season, (and Advent, to a lesser extent). When I sat down to write the hymn that would become All Is Ready Now, my intention was to write an Offertory that could be used in a Eucharistic service during Advent. I was trying to find something that included the imagery of the incarnation, God's great gift of a Son, as well as the imagery of the table, Christ's great sacrificial gift of himself, and combined them in such a way as to comment poignantly on our own gift giving in the context of the service but especially in the context of the season. One might argue here that I was attempting to impose my personal agenda upon the liturgy, especially considering my Grinchy self-revelation above.

Fair enough. However, the irony of what Christmas has become in our culture cannot be lost on any theologically aware person. Consider that the Savior of the world arrives with nothing. His coming is announced only to poor people living on the fringe of society who essentially also have nothing. There is no exchange of possessions. There is no opulent feast. There is only love and the beautiful purity of self-giving. The husband gives up his good name for his young wife and stepson. The mother gives up her childhood, her body, and her heart. Most importantly, though, God comes to us in an act of humility beyond imagination.

The truth is that the wealthy big shots who showed up on Epiphany almost blew the whole thing. That's the problem with having lots of possessions — you begin to identify yourself with them. Eventually you come to think that, when you have given things or money, you have given of yourself. Your “gift” requires recognition, acknowledgment, maybe even a parade down the center aisle. There's a great temptation to ride your camel right up to King Herod and announce, “See what clever astronomers we are! At great personal expense and risk to ourselves, we've traveled afar! Just look at the expensive stuff we've brought!”

I can articulate very eloquently the theological principles of stewardship. I've written some significant collections of music resources for the church with that specific focus. Yet, as we bring our gifts forward, even the first fruits of harvest, and place them on the table we must always recognize the inherent tension in the dual symbolism which is at work. That is to say, we always remember that before it was a table, it was an altar. There are still bloodstains and bits of charcoal scattered about beneath it. The family table may seem like a sensible place to set your wallet and spread out your dinner. The altar, however, is a burnt, bloody mess. Everything placed upon it will be destroyed.

Strive as we might to bring the true message of Christmas to those ignorant fools down in Whoville, we can see where this whole thing is headed. The lamb tied in the corner of the stable and this beautiful baby share the same fate. The manger will become an altar for this ultimate and final sacrifice in order that the altar might then become our table. Even if we were to come to a true and full understanding of the meaning of Christmas, even if in our practice of stewardship we bring the genuine first fruits of harvest, even if we are somehow able to achieve pure self-sacrifice for the benefit of others, it won't change a thing. All of our possessions, all of our best efforts, all of our offerings will ultimately be consumed on that altar by the blazing glory of God's holiness. Our own sacrifices are burned away, obliterated by the sacrifice of Jesus. We are left empty-handed. Only then, when the smoke has cleared, can we see that the altar has indeed become a table set with bread and wine. Only then can we finally hear and fully understand the invitation, “Come, for all is ready now.”

Jay Beech has long been recognized for his creative blending of musical energy and theological substance, and his ability to lift up ancient traditions within a modern context. Jay's compositions can be found in Evangelical Lutheran Worship, With One Voice, and Worship and Praise. His published works include hymns, liturgies, camp songs, musicals, and anthems which are sung each week in congregations throughout the United States. Jay is also a frequent guest worship leader and workshop presenter, and he serves part-time on the music staff at Trinity Lutheran Church in Moorhead, MN.